Our expert garage door company is also an experienced contractor for all gate repair services.

Routine maintenance ensures your garage door will work at its best.

The role of the garage door extension springs is to counterbalance the weight of the door and to facilitate its opening and closing. In residential overhead doors, they are used in pairs. There is one on each side of the door and are typically mounted above the horizontal tracks of the door system. In rare cases, when the unit is very heavy, two or more springs can be mounted on each side. These hardware components are typically made from galvanized steel wire which is resistant to rust and corrosion.

We Excel in the Replacement of Garage Doors and Parts

The back end of each extension spring is connected to a special bolt. The bolt is typically fastened to the angle iron which holds the garage door track in place while the front end of the component is attached to a pulley with the use of a specially designed fork. The lift cable goes over the pulley. Its other end is attached to the bottom corner section of the overhead door.

When the door is closed, the extension springs are in a stretched position, holding an amount of force which matches the weight of the unit. When opening is engaged with the use of the electric operator, the force stored in the components is released to create contraction. This released energy is used to enable the movement of the door. Hardware components do most of the work during opening and closing while the opener does the smaller share of the work.

Due to the tension which these components are under and the great amount of work which they bear, tend to wear-out more quickly compared to most of the other overhead doors parts. When they break eventually, the force which they once held d is released and the unit is left without counterbalancing. In this case, the metal safety cables which go through the garage door extension springs hold the unit in place until broken components is replaced.

Back to Garage Door Springs 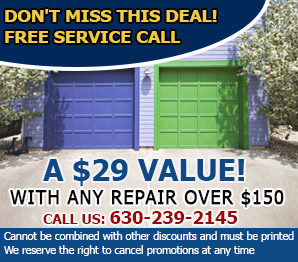